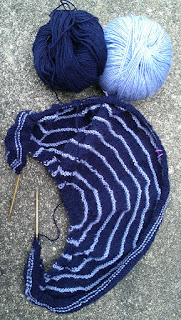 I've wanted to make a Catkin forever, but could never find the right yarn for it. A few months ago, while I was picking out yarn for that giant green baby blanket that took forever, I stumbled across a sale on JoJoland Ballad, a solid, fingering-weight yarn. I picked up two skeins each of lavendar and navy, and cast on a few weeks ago. So far, it's going quite nicely, though I imagine it's going to take me a pretty long time to finish. It's knit at a much tighter gauge than I typically use, which means more stitches, more yarn, and more time.

I've completed part one so far. I love the way the colors look together as well as the overall crescent shape. I think it'll look pretty awesome-- assuming I ever finish it.
Posted by Lauren at 11:04 AM No comments:

I'm starting to think that intended-to-be-funny books need to come with a series of codes on the back that indicate the type of humor involved so that I can better avoid awkward comedies of neuroses by un-funny Yankees. Try as I might, I don't find anything in that particular comedic vein (which also includes Woody Allen and David Sedaris) particularly amusing. Rather than laughing, I find myself rolling my eyes, all, "Seriously? That was a joke?"

I know that humor is largely cultural, and this may be one of the few areas in which I retain the cultural values of my upbringing (the other one is gambling: I don't do it, ever) rather than the more, uh, bougie ones I've adopted as a result of my high-fallutin' education. I wouldn't be caught dead watching NASCAR, reading an "Inspirational Fiction" novel, or owning "Red Solo Cup" in any audio format, but my sense of humor is just like that of the rest of my family's: very stereotypically Southern (if you're thinking Larry the Cable Guy, stop. 1) He's not funny. 2) He's a Yankee). You'd have to see us in action to get the gist of it, but it mostly entails incredibly cutting put-downs, sarcasm, well-timed happy hours, and, sometimes, things that could get us landed in a Jeff Foxworthy monologue, like shooting armadillos with handguns in the dark (my mom lives in Memphis, apparently it's okay to do that there) and riding a four-wheeler in flop-flops and a sundress. 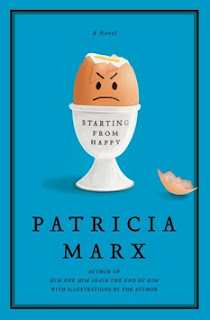 Basically, it's a unfunny-neurotic-Yankee novel about weirdos in relationships, with drawings and obligatory self-conscious smashing of the fourth wall. It has a few amusing moments, but I mostly found it tedious. You probably won't if you're into that sort of thing. If you're still bemoaning the end of Frazier, you'll probably enjoy it.

I'll be over here, eating my fried green tomatoes and judging you.

One of the reasons I started sewing again was that I had it in my head that making my own clothes would probably be more cost-effective than buying them-- unlike knitting, which is virtually never cost-effective in terms of the price of the materials or the amount of time I put into the garments in question. As I've honed my skills and expanded my repertoire, I've discovered that it's only partially true. Some things are cheaper to make, others are not. Here's what I've come up with so far:

Things I Should Probably Buy at the Store:

As a rule, both interlocking knit fabric and denim/heavyweight pants fabric are pretty expensive. If it costs me $10 in fabric for a t-shirt or $30 for a pair of pants, I'm better off hitting Old Navy. The fact that my sewing machine is a pretty basic model that isn't really designed for knits or denim is also a factor.

Things that are Cheaper for Me to Make:

The only time skirts or dresses aren't cost-effective for me to make is when knit fabrics are involved. Otherwise, it makes much more sense to spend $15-20 on fabric for a dress ($5-15 for a skirt) than to pay double that in the stores or online. Then there's the matter of tailored suits: I like to wear them, and plan on having a number of them when I start My Real Job after I graduate. While suiting fabric and linen blends can be pricey, both can be had on sale/with coupons for $10-ish a yard, and since I only need about 3-5 yards for a skirt suit, it's way more cost-effective for me to go that route than trying to find something nice off the rack.

You'll notice I've left dress shirts and shorts out of the equation altogether. I don't typically wear shorts (though I suspect they're cost-effective to sew because they require so little fabric relative to pants), and I'm kind of iffy on my ability to make anything that involves set-in sleeves at this point. All of the dresses I intend on making in the near future are sleeveless, and I'm not sure that I'm quite there, skill-wise, where sleeves are concerned. Beyond that, there aren't a lot of shirt patterns out there that I'm really into, and I'm also not sure whether it's more or less expensive for me to make a button-down myself or to just buy them on sale from Old Navy, the Gap, or NY & Co. (On the other hand, having such shirts that actually fit me might be worth the extra expense.)

I've spent most of my summer so far making skirts, because that's mostly what I wear this time of year. I usually live in those knit yoga skirts from Old Navy-- I have six or seven of them in different colors-- with solid-colored tank tops or t-shirts. In an effort to look more presentable/fashionable, I've decided to branch out a bit. The first pattern I've attempted can be found here. I liked working from it a lot; it's fairly idiot-proof and comes with detailed instructions and lots of pictures. Also, NO ZIPPERS! 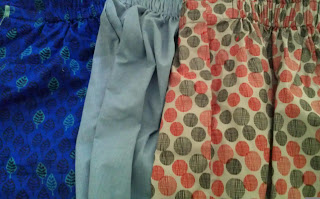 I decided to use quilting cotton for the fabric. It's cheap (each skirt only cost me about $7 in materials), durable, and comes in a wide variety of colors and patterns. I know a lot of people don't like working with it because it can be kind of stiff and non-drapey, but I've found that a good washing and some fabric softener go a long way towards fixing that. Also, I'm so hard on my clothes that they probably need all the durability they can get.

Overall, I'm really pleased with how they came out. My next skirt-sewing endeavor involves an actual pattern: very exciting, yeah?
Posted by Lauren at 10:08 AM No comments:

It's pretty rare that I knit for other people. As a rule, I don't have enough time to finish the projects I want to make for myself and don't care to add to the pile by promising friends and family members handknits. However, I sometimes find myself with yarn that isn't suitable for something for me, and that's when I designate it "present yarn."

This is Malabrigo sock yarn in eggplant. I originally intended to use it in a gigantic stole of doom, but wound up unraveling it because the color differences between the skeins were too big and caused the pattern to disappear. I decided to repurpose it, and used about 2/3 of a skein on the clockwork scarf I made a few months ago. The remainder of that skein will be used for some matching mitts, which I'll start sometime in the near future.

That still left me with one untouched skein, and I didn't want to use it on something else for me. Lately, I've been trying to branch out with the colors I knit with, and I do not need another dark blue/purple anything. So, I decided to make a shawl from it and give it to a classmate who 1) really likes to wear purple and 2) admires my shawls.

I'm not really in a hurry to finish this as I won't be seeing her again until August. That's probably for the best, as my knitting mojo tends to crawl into a hole and die when it's warm out. So far, I've completed the first chart (pictured) and have sort of started the second, but haven't made a whole lot of progress on it just yet.
Posted by Lauren at 8:21 AM No comments: 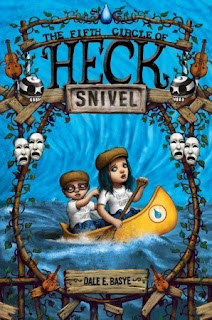 I can't stop reading this series. It's a sickness that has progressed to the point where I pre-order  new installments from the nook store, which isn't something I do very often (the only other authors I do that for are Toni Morrison and Lauren Oliver-- interesting combination, I know), and I'm sure you're all judging me for being this stuck on a children's series. I cant't help it, though: the premise is so creative and the books are really, really funny.

Since this is part of a series, I'll put most of the review behind the jump:

Lauren
My name is Lauren Adams. I am nineteen years old. I'm from Knoxville, Tennessee and graduated from Webb. Next year, I'll be a junior at Vanderbilt University.