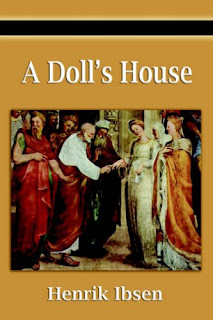 A Doll's House is the fourth book of the Classic Feminist Literature Challenge I've been working my way through. I wasn't initially sure what to expect from it, given that I don't read a whole lot of plays (I'm a high school theatre survivor) these days, and I had never heard of it before. The copy I checked out from the library had a plain, off-white cover with no description or pictures on it, so I took the plunge and started reading.

I wound up enjoying it quite a bit! It only took me about thirty to forty-five minutes to get through, since it's only fifty-four pages long. It is a little dense in spots, though, but that's typical of plays. It actually reminded me of The Importance of Being Earnest, though it was more social commentary and less satire. Both Wilde and Ibsen highlight the inequalities of marriage and other social relationships between the sexes masterfully. That's where the similarities end; The Importance of Being Earnest is a comedy, while A Doll's House is very much not. Wilde conveys his opinions through mocking, irony, and sarcasm, whereas Ibsen reveals a handful of truly crappy scenarios which are the direct result of women being legally under the control of men.

I was strongly reminded of The Subjection of Women as I read A Doll's House, as well. Mill went into great deal detailing the number of ways in which the marriage contract could hurt or damage women, and the reader sees two of them play out in A Doll's House. Christine, the friend of Nora, the protagonist, has been left destitute as a direct result of her husband and father's deaths. Her father died young, leaving Christine's ill mother and two younger brothers with little support, a situation that necessitated Christine marrying for money, rather than love. Unfortunately, Christine's husband's money virtually evaporates, and while she was able to care for her mother until her death and her brothers until they were old enough to make their own way in the world, she ultimately was left penniless with no source of income and forced to work a series of odd jobs that were not enough to live off of, which leads her to beg a job from Nora's husband, Torvald. Her experiences exemplify the precarious nature of women's social and economic status at that point in time.

Nora, on the other hand, experiences Wollstonecraft's gilded cage: she is continually condescended to by her narcissistic husband, who confines her to the domestic sphere. As I read, I couldn't help but note that Nora was probably exactly the sort of woman Wollstonecraft detested: superficial, flighty, uneducated, and perennially self-absorbed-- and made such by the men in her life, who refused to educate her or allow her any real agency. That's what gets her into trouble: since she is unable to take out a loan in her own name, she is forced to forge a bond-note using her father's information when the family fell on rough economic times some years ago. When the man who loaned her the money threatens to rat her out to her husband, her entire world unravels. It doesn't matter that her circumstances were patently unfair or that she had only the best of intentions; her actions left her wide open to blackmail.

Apparently, this play generated so much controversy that Ibsen was pressured into changing the ending to be more palatable. Commenting on the negative aspects of marriage was evidently not something that went over well with polite society. Interestingly, Ibsen based the play off of an incident in the life of a friend, Laura Kieler, who reportedly did not appreciate being known as "The woman from A Doll's House." While she eventually became a fairly well-known author in her own right, the play continued (and clearly continues) to overshadow her work. Ibsen appropriating her experiences seems sort of sketchy to me. On the one hand, he felt it was important to underscore the injustices women face. On the other hand, did it justify him invading Kieler's privacy and airing her family's dirty laundry for all the world to see? The conflict of where the line between one's personal life and the social politics of feminism ought to be drawn pervades feminist literature. I imagine I'll be seeing more of it as this challenge continues.

Lauren
My name is Lauren Adams. I am nineteen years old. I'm from Knoxville, Tennessee and graduated from Webb. Next year, I'll be a junior at Vanderbilt University.